The British pound remains in red on Friday and attempts to extends Thursday’s 0.8% drop.
Risk aversion on rising worries about the slowdown in  global economic recovery and stress for the UK economy from the second wave of Covid-19 infections that triggered more restrictive measures, weigh on sterling, with Brexit trade talks saga being the main driver of the currency.

The European Union leaders expressed their concerns about the lack of progress in trade talks and asked Britain to compromise on their new economic partnership or to be ready for trade disruption, putting the ball in UK’s court.
The EU wants a deal and grants more time for talks about new trade agreement before the end of the year, but requires the initiative from Britain, pointing that they are also ready for no-deal Brexit scenario.

Britain expressed their strong disappointment, but PM Johnson will respond today and set out his approach to the talks.

Technical studies on daily chart are weakening as momentum continues to slide and approach the border of negative zone, while converging 5 and 10DMA’s attempt to form bear-cross.
Thursday’s completion bearish engulfing pattern and today’s break below the base of narrowing daily cloud add to negative signals. 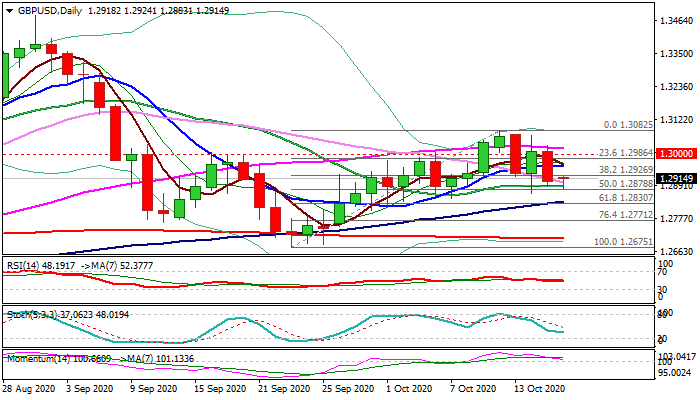