The Euro is holding in a narrow range on Friday, awaiting release of key US jobs report for August.
Techs continue to point lower despite Thursday’s strong downside rejection and failure to close below pivotal supports at 1.1822/16 zone (cracked double-Fibo, reinforced by 30DMA) that left long-tailed daily Doji.
Near-term action is weighed by Tuesday’s bull-trap above psychological 1.20 barrier and bearish daily candle with very long upper shadow that was formed.
Daily studies are gaining bearish momentum and RSI / stochastic head south, adding to negative signals.
This scenario requires confirmation on eventual close below 1.1822/16 zone that would open next pivots at 1.1750 and 1.1700 zone.
On the other side, fundamentals could be well supportive for the single currency as expectations for 1.4 million jobs increase in August would be significant in normal circumstances, but seen insufficient to generate stronger positive signal during the period when the US economy struggles to recover from devastating Covid-19 pandemic.
August’s forecast also falls below previous month’s 1.76 million increase that points to a slowdown in US labor sector’s recovery after NFP’s catastrophic 20.6 million fall in April.
Weaker than expected ADP private sector jobs report, released earlier this week, which is often used as an indication for NFP, adds to fears that August figure may fall short of expectations.
Although Aug unemployment is expected to fall below 10% for the first time since March, this wouldn’t have significant positive impact.
Scenario of weaker than expected NFP would depress dollar and provide fresh lift for the Euro for renewed attack at 1.20 pivot.
Conversely, the upside surprise would inflate the greenback and push the Euro into deeper correction. 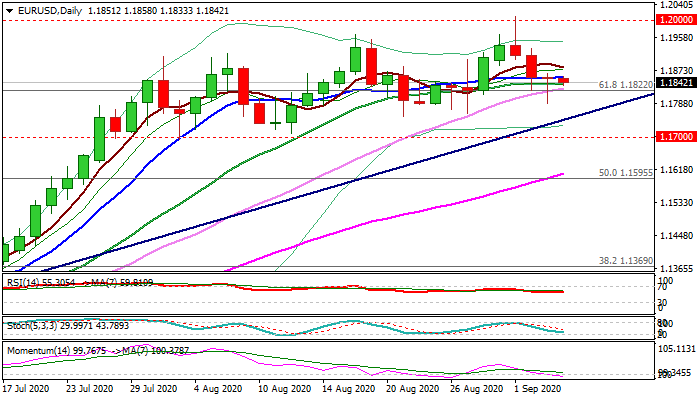