WTI rose further on Friday, extending recovery from $58.06 higher base, driven by weaker dollar and renewed optimism over OPEC-led efforts to stabilize oil markets on global production cut.
Oil price maintains bullish stance which was boosted by recent comments from Saudi Arabia which confirmed its strong commitment to stick to existing output reduction program which includes world’s major oil producers and was reinforced by comments from UAE energy minister who said that oil producers led by Saudi Arabia and Russia aim to draft agreement on a long-term alliance to cut oil production by the end of the year.
Thursday’s extension and close above $61.34 (Fibo 61.8% of $66.64/$58.06 fall) was bullish signal, but mixed setup of daily MA’s; overbought slow stochastic and weak momentum weigh and warn of recovery stall despite firmly bullish sentiment.
However, near-term action remains underpinned by rising daily cloud (cloud top lies at $61.28 and marks initial and significant support) with bullish outlook to remain in play while cloud top holds.
In addition, WTI contract is on track for strong bullish weekly close after suffering heavy losses in past two weeks, which is bullish signal and will be reinforced by weekly close above $61.34 Fibo barrier.
Extension through next barrier at $62.35 (daily Kijun-sen) will be bullish signal, while return and close below cloud top could be negative signal of recovery stall and fresh weakness. 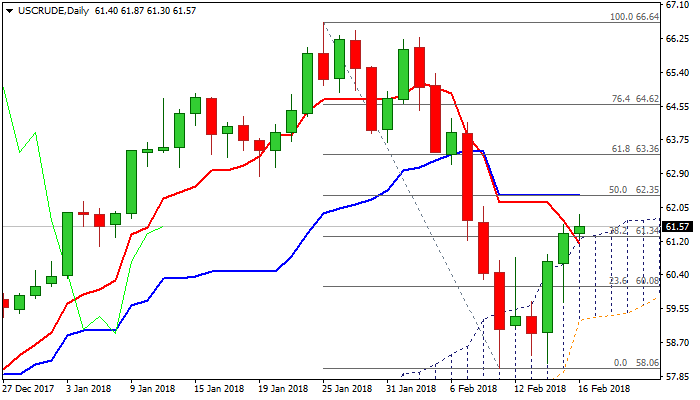