Bulls pressure key Fibo barrier ahead of US inflation data

The Euro trading at the upper side of the near-term range in European trading on Wednesday, after eventually penetrating into thick and falling daily Ichimoku cloud on Tuesday.
The action is still holding below pivotal Fibo barrier at 1.3795 (38.2% of 1.1692/1.1186 bear-leg) which caps since the mid-November.
Break here is needed to signal an end of extended sideways-trading and open way for stronger correction of larger downtrend from 1.2266 (May 25 2021 peak).
Daily studies are mixed as MA’s  (10/20/30/55) are in bullish configuration but positive momentum is fading that may obstruct fresh bulls, but the near-term bias is expected to remain positive while the action stays above daily cloud base (1.1347) now reverted to support.
Traders await release of US inflation data, which is expected to provide stronger direction signal.
Economists expect US inflation to rise to 49-year high at 7.00% in December that would add to Fed’s decision to start tightening monetary policy as early as March, with policymakers seeing three hikes this year, while many expect four rate increases on surging inflation.
The single currency may come under pressure on such scenario, as traders would increase their dollar longs on expectations for aggressive actin from the US central bank.
However, many analysts warn of buy the rumor – sell the fact scenario, as high levels of the dollar offer a good selling opportunity.
Also, similar action could be expected if US CPI falls below expectations that would deflate expectations for increased pace in Fed’s tightening this year. 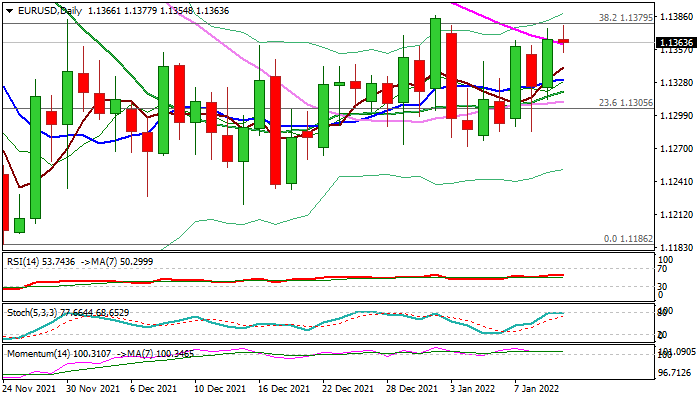 US inflation rises the most in nearly four decades in December