Cable stands at the front foot ahead of Fed

Cable edges higher on Wednesday, looking for another attempt at daily cloud top (1.2944) after the action in past two days was capped by rising cloud top.
The pair holds in green for the third straight day, with series of higher lows pointing to bullish near-term bias.
UK inflation fell to the lowest in almost five years in August, but release had a minor impact on sterling, inflated by weaker dollar and signals that the government might have a way through parliamentary labyrinth for PM Johnson’s bill which breaches existing Brexit agreement.
Daily techs show 14-d momentum rising from deep negative territory and RSI/Stochastic also heading north, but initial bullish signal could be expected only on firm break of daily cloud top, while rise above next pivotal barriers at 1.3000/37 (psychological / Fibo 38.2% of 1.3482/1.2762) is required to generate reversal signal.
Fed policy statement and remarks from chief Powell are key events today and expected to provide fresh direction signals.
The dollar may come under fresh pressure on dovish stance from Fed (expected scenario) on extension of ultra-accommodative policy and promise for further stimulus that would further boost pound’s recovery 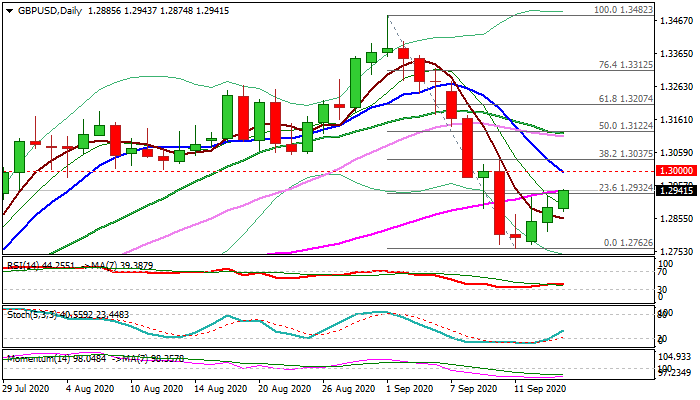