The WTI oil is consolidating within a narrow range on Wednesday, after the recent recovery rally peaked at $86.94 (the highest since Sep 15), taking a breather ahead of today’s OPEC+ meeting, which is expected to provide fresh signals.
The cartel had a proposal of stronger production cut on its table for some time, with expectations for a 2 million barrels per day cut to boost oil prices.
The recent discussions between the OPEC+ member countries lacked consensus, as some producers are unable reach their production quotas, while the United States are opposing the plan.
In addition, the US prepared a letter to order stopping exports in attempts to keep oil prices lower ahead of mid-term elections, though faced strong opposition from US oil trade groups, which urge the administration not to proceed with the plan.
Technical view shows improving daily studies, as daily MA’s (10/20/30) turned into bullish setup and 14-d momentum emerged into positive territory that support near-term action.
Bulls probe through 50% retracement of $9762./$76.25 bear-leg, close above which would generate bullish signal and open way for attack at $89.46/$90.00 pivots (Fibo 61.8% / psychological). 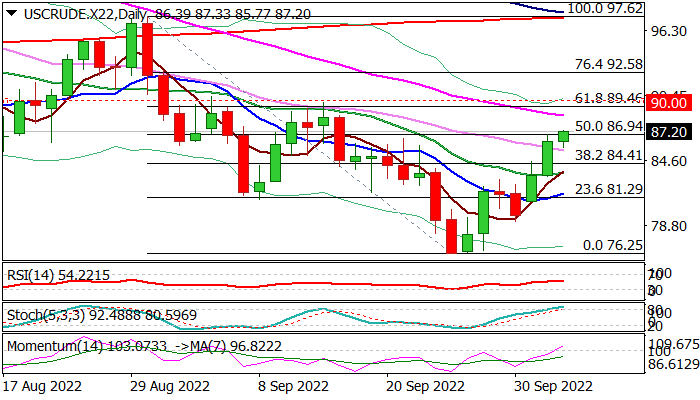