Cable dipped in early European trading on Tuesday after unsuccessful probe above psychological 1.30 barrier (also weekly cloud base) and Monday’s action ending in long-legged Doji.
Strong indecision is fueled by Brexit uncertainty as UK parliament is going to vote again on Boris Johnson’s Brexit bill later today.
Johnson is in hurry to pass the plan through parliament as 31 Oct deadline is nearing, though lawmakers are very concerned about his motivations and would look for further protection in law to avoid any possibility of divorce without deal, which could seriously hurt UK economy.
More than three years after Brexit was voted, the situation remains completely unclear as the country is strongly divided on this matter and still without the answers on key questions – whether it will happen and if yes, when and how.
Sterling rose significantly in past two weeks, driven by renewed optimism for orderly Brexit, however, the picture becomes more unclear as the deadline nears and all cards are still on the table, without any firm decision so far.
Recent rally shows initial signs of stall on Monday’s Doji and overbought daily studies, as strong headwinds from 1.30 barrier continue to hold bulls.
Rising 5DMA (1.2921) and broken Fibo 38.2% barrier (1.2882) mark initial supports, but reversal signal could be expected on break below 200DMA (1.2714), reinforced by golden-cross with 10DMA.
Conversely, firm break above 1.30 pivot would signal continuation of recovery phase from 1.1958 (3 Sep low).
Brexit story remains key driver and any decision expected to spark fresh acceleration, with near-term action likely to remain within current ranges until more news come out.
The UK House of commons is due to vote at 18:00 GMT. 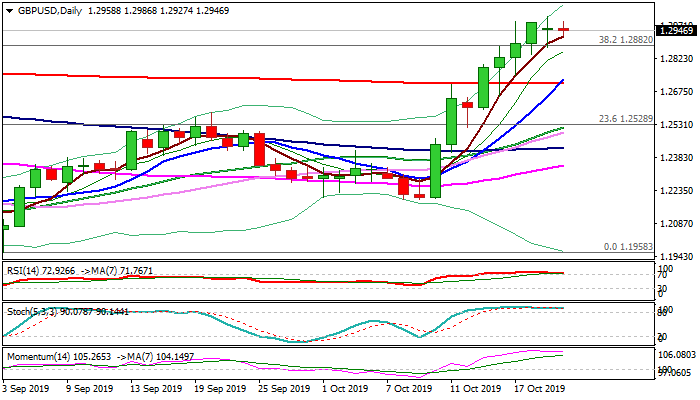