WTI oil is consolidating above strong $100 support (psychological / Fibo 61.8% of $92.92/$111.33 upleg), following a 7% drop on Monday (the biggest one-day loss since Mar 28), as strong dollar and economic worries soured sentiment, increasing pressure on oil prices.
Coronavirus lockdowns in China raise worries about lower demand from world’s top oil importer, the dollar hit 20-year high and worries that global economy is sliding into recession on soaring inflation and impact from the conflict in Ukraine that would strongly hurt demand for crude oil.
Fresh weakness reversed the most of last week’s advance on signals that the EU is working on plan for total embargo on Russian oil, but the bloc’s member states are still far from the unity on this question that continues to hurt the sentiment, in addition to existing fears that Russia retaliates by cutting off gas supplies to the Europe, whose economies are highly dependent on Russian energy.
Monday’s drop weakened the structure on daily chart, although near-term bias is expected to remain positively aligned as long as price stays above $100 level, as 14-d momentum is turning higher, still in the positive territory.
Potential rebound could be also attracted by daily cloud twist, due on Friday, however, bulls need to clear daily Tenkan-sen ($105.72 and dent daily cloud base ($106.19) to ease downside pressure and shift near-term focus higher.
On the other side, weak fundamentals and Monday’s large bearish daily candle are expected to weigh on near-term price action and keep $100 pivot at risk, with break here expose supports at $98.54 and $95.27 (trendline support / Apr 25 trough). 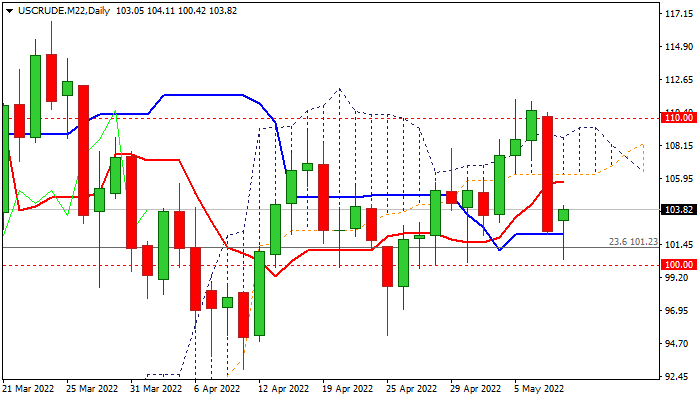