Recovery attempts were short-lived so far; OPEC / US shale producers meeting in focus for fresh signals

WTI oil moved higher on Monday and cracked barrier at $61.69 (Fibo 38.2% of $64.22/$60.12 bear-leg) but was so far unable to sustain break, as recovery extension stalled at $61.95.
Subsequent pullback returned the price back into thick hourly cloud after short-lived probe above the cloud to retest support at $61.57 (cracked 20SMA)
Techs on lower timeframes are losing momentum, but strong momentum exists on daily chart, signaling that renewed attempts higher cannot be ruled out, despite other indicators are in mixed mode on daily chart.
Repeated strong downside rejections last week which left two long-tailed Dojis and formed double-bottom at $60.12, continue to underpin recovery.
However, oil price may need a catalyst to spark fresh upside on break through $61.69 Fibo barrier and following hurdles at $62.07/17 (converging 55/10SMA’s).
Otherwise, risk of further easing and return to $60.12 base would remain in play.
Meeting of OPEC and US shale firms in Houston is due later today, with oil producers to discuss how to overcome current problem with rising US shale production which dents strong efforts from OPEC-led group of main world oil producers to fight global oil oversupply by reducing oil production. 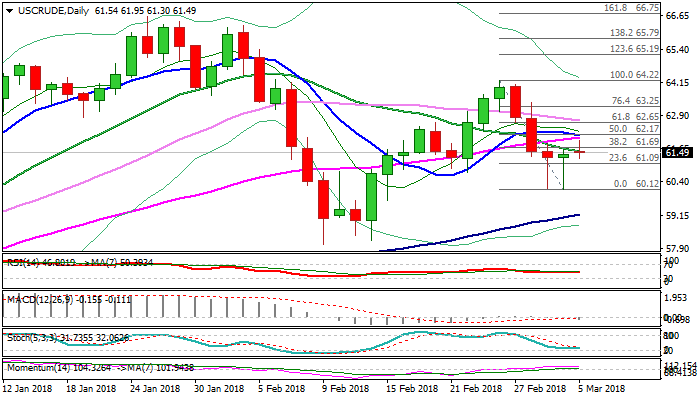 Loonie remains under strong pressure on NAFTA, US tariffs; psychological 1.30 barrier in focus