Cable regained traction and bounced on Wednesday, signaling an end of three-day pullback, sparked by a double rejection at 200DMA (1.3733) last week.
Pound was boosted by UK CPI data which showed that inflation in Britain continued to rise and hit the highest level in nearly 30 years in December, offsetting policymakers’ general view of transitory process and boosting hopes for another BoE’s rate hike on Feb 3 monetary policy meeting.
On the other side, political turmoil in Britain over a series of lockdown parties in Downing Street, which caused strong revolt by lawmakers, resulting in demands for PM Johnson’s resignation, so far did not have strong negative impact on the currency, but may undermine pound’s performance.
Daily studies remain constructive and support scenario of an end of shallow correction, as 14-day momentum remains in the positive territory and turned north, while formation of 20/100DMA bull-cross and thick daily cloud underpin the action.
Today’s close above cracked 10DMA (1.3627) would generate initial positive signal, with close above 1.3660 (Tuesday’s high / Fibo 50% of 1.3748/1.3572 pullback) to complete bullish engulfing pattern and boost positive signals. 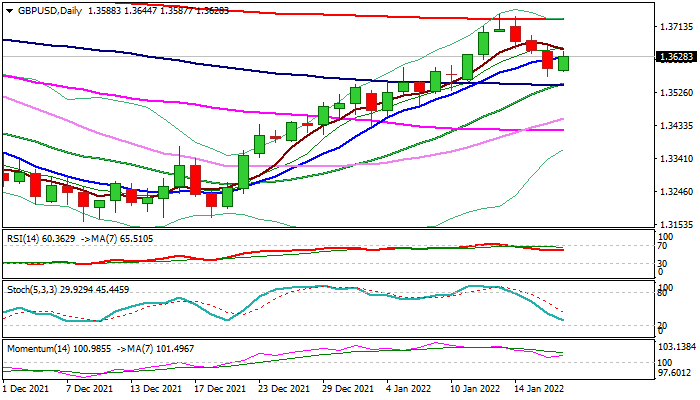