Cable is consolidating under new high at 1.2989, posted after Brexit deal announcement on Thursday.
The pair advanced 5.6% in last six days and remains in strong near-term uptrend, but may enter corrective phase before attempting through psychological 1.30 barrier as weekly studies are bullish and weekly cloud twist attracts.
Also, Thursday’s marginal close above 1.2882 (Fibo 38.2% of 1.4376/1.1958 fall) was initial bullish signal which requires confirmation on weekly close above.
On the other side, daily stochastic and RSI are overbought and turning south; bullish momentum is fading that bode well for correction.
Today’s dip found footstep at 1.2839, where initial support lays, followed by rising 5DMA (1.2796), while broken 200DMA (1.2713) marks pivotal support, loss of which will be bearish signal.
Markets digested news that Brexit deal has been reached, but things remain complicated and all scenarios are still on the table.
Northern Ireland’s DUP opposed the agreement and Labor party was also against, describing the plan as worse than Theresa May’s proposal that would make strong obstacles on the way for verification of the deal.
All eyes are on Saturday’s UK parliament’s vote on Brexit deal, which is seen as the biggest risk for British pound since referendum in June 2016 and fireworks could be expected on Monday’s market opening. 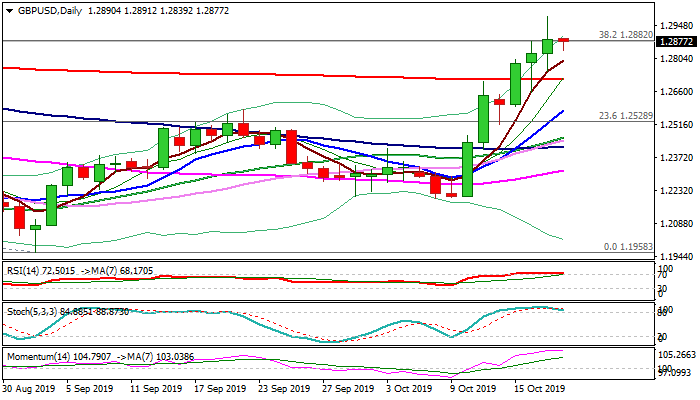