The Euro made a large swings after ECB’s surprise 50 basis points rate hike, with initial reaction being positive, though the rally stalled again under pivotal barrier at 1.0283 (daily Kijun-sen / 50% retracement of 1.0614/0.9952).
Subsequent weakness fully reversed the post-ECB rally, signaling that the single currency is lacking strength for stronger rise.
The third consecutive daily close below 1.0283 pivot would add to signals that the latest recovery following rejection at a parity level, is running out of steam.
Although the ECB raised its interest rates above the expectations the gap between the ECB and Fed remains and will likely widen further as the US central bank is about to make another 75 basis points hike next week, with some speculations that it may opt even for 1% raise.
This continues to weigh on euro, which is so far resisting and holding within a range for the second consecutive day, but overall structure on daily chart remains bearishly aligned and the downside is expected to stay vulnerable as long as pivotal barrier at 1.0283 is intact.
In addition, repeated close below 1.0205 (Fibo 38.2%) would weaken the tone, though extension below 10DMA (1.0116) is needed to signal reversal and confirm a lower platform at 1.0275 zone.
Traders focus on Friday’s release of PMI data from EU and Germany, which would provide fresh signals. 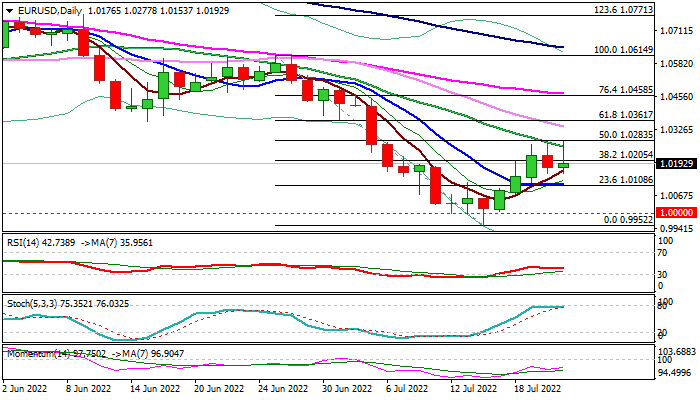