Cable cracked 1.17 barrier and hit two-week high on Monday, following a gap-higher opening on renewed risk appetite.
Fresh bulls extend last Friday’s rally, which despite facing headwinds, managed to generate initial bullish signal on marginal close above 10DMA (1.1568).
Improved sentiment is pound’s main driver at the beginning of the week, but rally looks for more support to accelerate recovery.
Daily techs are still fragile as momentum indicator is holding in negative territory and stochastic is approaching the border of overbought territory.
Renewed strength faces pivotal barriers at 1.1712/38 (falling 20DMA / Fibo 38.2% of 1.2276/1.1405 descend), with clear break here to generate stronger bullish signal and open way for further recovery.
Fundamentals are supportive, as report released earlier today showed UK economy grew by 0.2% in July, although at slower than expected pace, after contracting by 0.6% previous month.
Traders focus on UK and US inflation reports as key events this week.
US inflation in the US is expected to ease further in August (y/y 8.1% f/c vs 8.5% in July) though core inflation is likely to rise further (y/y 6.1% f/c vs 5.9% in July).
On the other side, inflation in UK is expected to rise to 10.2% in August from 10.1% previous month).
Both figures will contribute to the decisions of the US Federal Reserve and Bank of England, which both meet next week and expected to maintain aggressive stance in regards to their monetary policies. 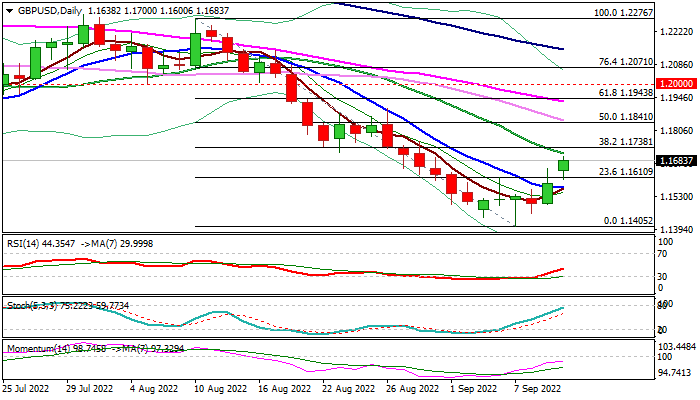